By now you are probably aware that the hit show Black-ish tackled the topic of Postpartum Depression (PPD) last week on their show. Here are my better-late-than-never takeaways from the show. For those of you who do not watch Black-ish it will probably be helpful to read this post anyway although, I strongly suggest watching the show, it’s just so good!

1- PPD doesn’t happen right away. Bow was her regular bubbly self in the season premiere of Black-ish shortly after Devonté was born but over time her emotions changed. This is consistent with how PPD operates, it can take months before a mama experiences symptoms of the mood disorder. 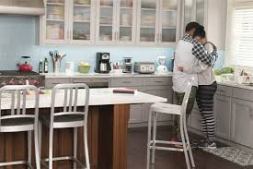 2- Partners and close loved ones are key and identifying and supporting mamas who are experiencing PPD in getting help. Without the support and recognition from Dre (Bow’s partner), Bow may have never gotten the support that she needed in order to recover. 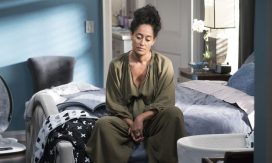 3- There is a difference between the baby blues and postpartum depression. Most women experience a drop in their energy, increased anxiety, and extreme mood swings after having a baby, this is known as the baby blues and eventually goes away after a few weeks. Postpartum Depression lasts longer and can have more extreme symptoms. In addition, PPD needs to be treated in most situations or can lead to harmful behavior. So when Ruby (Bow’s mother-in-law) was telling Bow, oh you just have the baby blues, under most circumstances with new moms that would be true but it is important to distinguish the two. 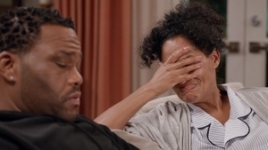 4- Getting help can feel like more of an inconvenience than being ill. I know when I find myself sick or injured it can seem like a lot of  work to rest or go to the doctor when I have so many other things going on. I interpreted this as part of why Bow was so hesitant to go to the doctor. I can imagine her thinking but who is going to watch the kids? How much milk will I need to pump for that trip? Does that mean I have to shower? All these questions aside, we as mothers need to remind ourselves that we need to put the symbolic oxygen mask on ourselves first before we can help anyone.

5- The most healthy thing you can do to recover from PPD or the baby blues is to distance yourself from people who are critical about your child rearing. Grandmas, lolas, abuelas and most aunties alike will take offense to this but this is really important. I know I would have had a better experience with adjusting to motherhood with my first child if I had put in place the boundaries that I had established by the time I had my second. Bow’s confrontation with Ruby was so real and brought back so much for me. Mothers need to feel empowered to distance themselves from negativity (even if it is seemingly well meaning) while they are transitioning to raising a new child. In addition, partners need to be prepared to back up the mother’s of their children when trying to create that distance.

6- Recovery doesn’t happen overnight. Dre expressed concern that although Bow was on medication, he had not seen a change in her mood. Recovery takes time and mother’s and love ones need to be aware of that.

7- PPD is hella confusing. It goes against everything that one is told about motherhood. Mother’s simply aren’t themselves and that is confusing for all parties involved. I think Bow and Dre did a good job of communicating with their children about what was going on. In addition, although I wouldn’t recommend “women’s magazines” for information, Dre did a good job of educating himself on the topic and taking the correct steps to get help for Bow.

8- Having PPD does NOT make a woman weak. I don’t often agree with Ruby but in the end when she apologizes to Bow for her actions she explains how Bow exhibited strength by getting the help she needed. Strength that  Ruby had not had when she needed help. It takes a strong mama to do whatever it takes to be well for our children and that includes attending to our mental health needs.